Planetary gear reducers are popular due to the way they transmit a great deal of power through a relatively small package. The central sun gear is surrounded by a number of planet gears which engage both the sun gear and outer ring gear. Due to the large number of gear teeth always in contact, a great deal of torque is transmitted.

An RXC drive is similar. The sun gear is replaced by an Input Disc, the planet gears by Cones, and the ring gear by a Control Ring. There are no gear teeth. Torque is transmitted through contact with the rolling edges of the cones.

If this were the complete system, and the Cone retainer were tied to the output shaft, it would operate as a simple speed reducer. In fact, NIDEC-SHIMPO does manufacture such speed reducers, for applications which cannot toler­ate the speed ripple that results from engaging and disen­gaging gear teeth. No gears, no ripple.

However, the Ring-cone variable speed system separates the cones from the output shaft, and adds another contact element, the Cam Disc, to allow output speed changes.

As shown in the diagram right, the cones are somewhat “umbrella shaped,” with a stem area. When placed in a retainer, the cones are held at such an angle that a portion of the cone surface is horizontal. This horizontal surface makes contact with the Control Ring.

As the Cones spin, they are also orbiting the Input Disk, as with a typical planetary gear system. If the Control Ring is adjusted such that the orbit speed and Cone edge speed cancel each other, the output shaft will remain stationary under power. This is a unique feature of the Ring Cone system.

To further take advantage of the low speed / high torque relationship, the Ring-cone design adds a spring-loaded cam system which forces the friction components more tightly together as the load increases. This action also causes the Cones to move relative to the Control Ring, slowing the output speed momentarily. The combination both prohibits slip between components, and automatically increases the output torque, two actions which may resolve the increased load. 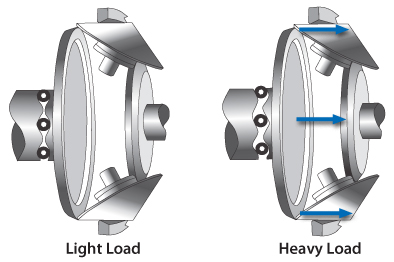 The result is a system that will stall the properly sized input motor before it will slip. When the load decreases, the spring-pressure on the components relaxes, reducing system stress and allowing the output speed to return to normal. Again, a unique feature which makes the Ring-cone system ideal for the toughest applications, especially those subject to wild fluctuations in load.