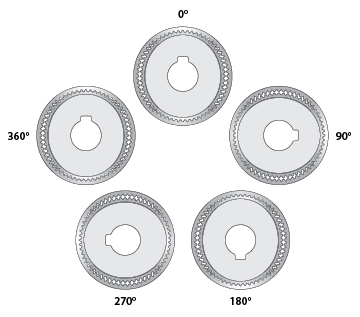 The rotation the wave generator subassembly results in a much slower rotation of the flexspline in the opposite direction. For a harmonic gearing mechanism, the gearing reduction ratio can be calculated from the number of teeth on each gear:

As an example, if there are 202 teeth on the circular spline and 200 on the flexspline, the reduction ratio is

Therefore, the flexspline rotates at 1/100 of the speed of the wave generator assembly and in the opposite direction. This method of reduction permits a variety of ratios to be set without changing overall gear set shape, increasing its weight, or adding reduction stages. The variety of reduction ratios possible is restricted by the structural tooth size limitation for any given configuration.